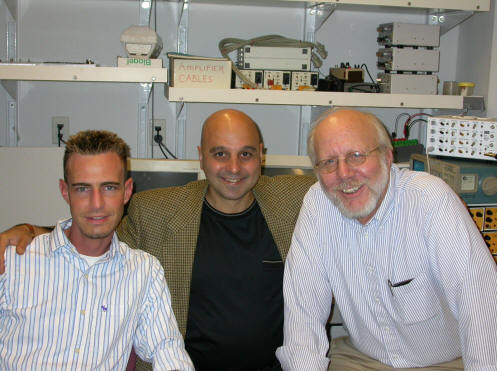 The Utah array was invented by Prof. Dick Norman (on the right). Manipulating the array is daunting with conventional methods such as forceps, etc. To easily handle the array for implantation we use a  2.9 mm (OD) stainless steel (s.s.) tube attached to a vacuum, with a pressure control valve in between the vacuum s.s. tube. It is important to tack down the connecting wire immediately after positioning the array on the surface of the cortex. The array should be gently maintained in place on the surface of the cortex while he wire bundle is tacked down to the skull with, say, bee's wax. Before positioning the inserter over the array for implantation, make sure the arrays stays in place on its own (i.e. without having to hold it down). This requires that the electrode tips pierce the pia. This is simply done by gently pushing down the array on the cortex until it 'grabs'. Do this deliberately and only once, otherwise   you will damage to the cortex.

The Utah array is cut from a block of Silicon and the electrode tips plated with Platinum, or Iridium oxide. 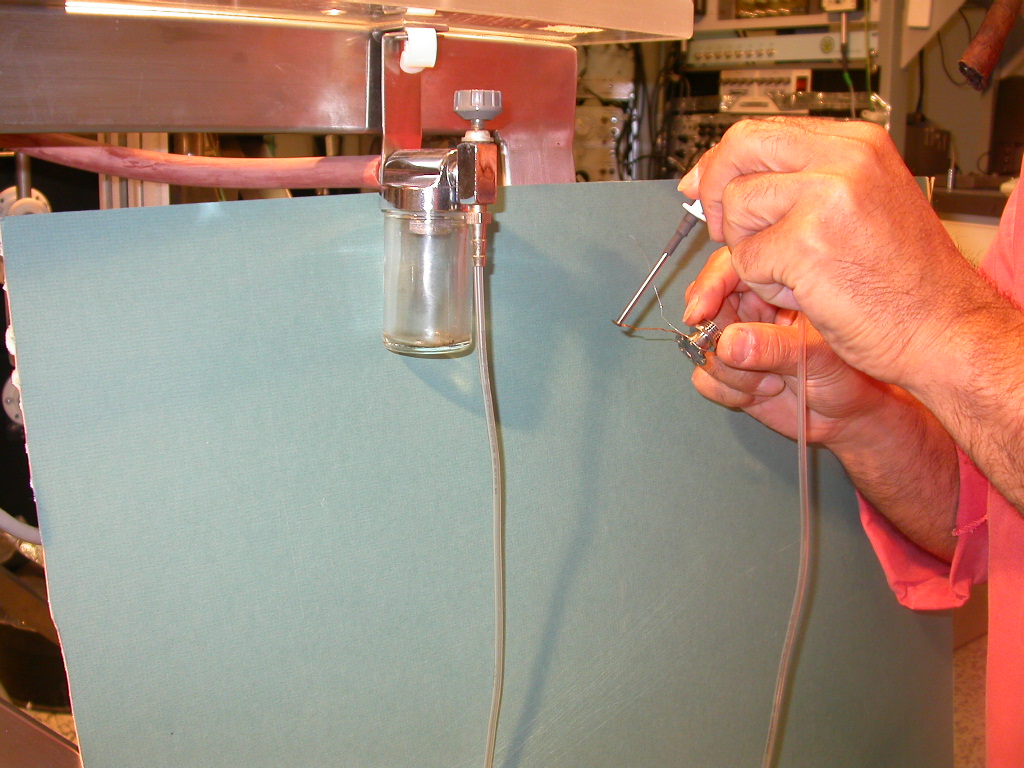 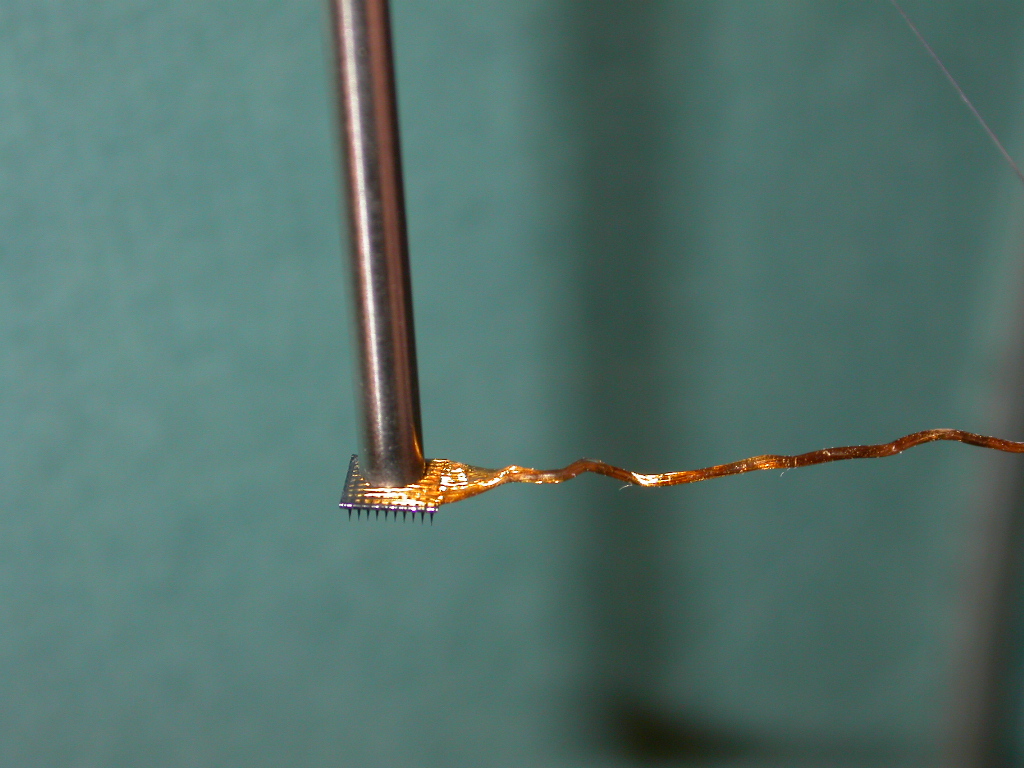 Iontophoresis and neural activity recordings   The best resource on iontophoresis is Dale Purves's 1981 book ('Microelectrode methods for intracellular recording and iontophoresis'. Academic, London). Lalley (1999) has a very good chapter in 'Modern Techniques in Neuroscience Research' (Springer-Verlag, pp 193–212). You'll find statements in some of the literature that pipettes with tips less than 5 mm will block, this is untrue. With such large tips the active substance in the pipette leaks out by diffusion and bulk flow (due to gravity), even when retaining currents are used. In theory the flux of a substance from the tip of a micropipette depends only on the current, not the tip diameter. However small glass tips have variety of physico-chemical processes that result in tip blocking (see Purves, 1981). Tips of 1-2 mm, or less, work very well and are a compromise. They reduce leakage due to diffusion and bulk flow, whilst insuring that the electrode won't block. A retaining current of 10-20 nA (of opposite polarity to the ejecting current) further reduces unwanted leakage. Higher retaining currents deplete the active species from the tip of the micropipette (i.e. create a 'dead-space'), thus making it longer to observe a physiological effect once iontophoresis is started. However, if one wants to be sure that no leakage occurs, higher currents should be used, baring in mind the above caveat. 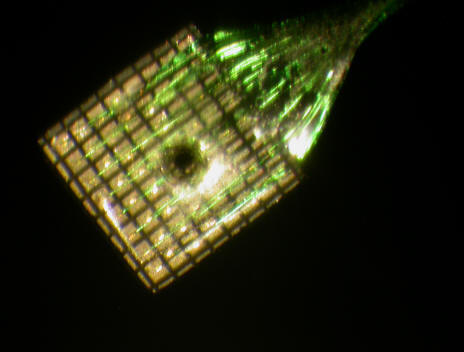 We have used iontophoresis in a variety of experiments (see publications) in conjunction with microstimulation and single unit recordings and more recently with the Utah multi-electrode recording array (made by Cyberkinetics). We have several such arrays with a laser etched hole of about 500 mm diameter at their center, which allows for an iontophoretic pipette to be inserted. In this way we were able to determine the size of the area activated by focal bursts of neural activity, their propagation velocity and the mechanism of spread (see the J.Physiol. paper). Interestingly, activity within the cortex does not spread as a wave, but simply by conduction of neural activity along intracortical axons. We termed this process 'activity driven recruitment' of cortical territory.

I'll have more on this and the  topics below soon, for now go to the publications section and

What's more important is, what does the H-reflex measure, or test for? If the subject is at rest the H-reflex size will depend on how close the membrane potential (Vm) of motoneurons is to threshold (Vt). In that condition the H-reflex can be said to test for the excitability of the motoneurons. But suppose this is measured after some natural activity, or experimental condition, which for some time after the activity increases pre-synaptic inhibition at the intraspinal branches of Ia spindle afferents projecting to the motoneurons. If we compare the H-reflex just obtained to one obtained before the activity, or experimental condition, the conclusion that the motoneuron excitability has decreased is incorrect. This hypothetical situation was construed to make the point that at all times the H-reflex size will depend on the postsynaptic state of the motoneurons and on the state of presynaptic inhibition of the Ia-afferent terminals. Testing the H-reflex at rest is not generally very useful. What is useful and sometimes interesting is to compare the H-reflex size in different motor tasks, or even in situations such as doing mental arithmetic, perhaps in an anxiety state, etc. If measurements are made between tasks or physiological states at matched levels of the recruitment level of the motoneuron pool, then the H-reflex size will depend on the extant level of presynaptic inhibition at the time it is elicited. The matching of the recruitment levels of the motoneuron pool tested in different tasks, eliminates the confounding factor of postsynaptic state changes, which are quite strong. This leaves changes in presynaptic inhibition to account for changes in H-reflex size. All this is well and good, but the idea depends on two assumptions. First that the motoneuron pool is recruited in the same manner in different tasks and this is strongly supported by Henneman's size principle. The second assumption is that the motoneurons are in the same neuromodulatory state in the two, or more, conditions that may be tested. Perhaps, for example, when we studied walking vs. running, more 5-HT (Serotonin) was liberated during running. Here is what Manuel and Zytnicki explain in their recent review article.

'... one might thereby wonder whether they influence the motor output during the tests of motoneuron excitability (H-reflexes and transcortical magnetic stimulation (TMS)) that are classically used in human neurophysiological studies. Lessons from the animal experiments reviewed here prompted us to make the following suggestions. The excitatory potentials evoked in motoneurons during these tests might be amplified by the PICs, depending on their time course, thereby increasing the probability of reaching the threshold for discharge. Since the H-reflex is achieved by applying a single electrical shock on the nerve, it is very likely that the stimulation-induced Ia EPSPs are much too brief (a few milliseconds) to engage CaPIC. On the other hand, however, INaP might be able to amplify brief EPSPs. Furthermore, it is likely that the EPSPs amplification by INaP would be more important in the motoneurons innervating fast-contracting motor units that display a marked resonance than in those innervating the slow contracting motor units that hardly display any resonance (see above). Motoneurons innervating the fast-contracting motor units will then reach their firing threshold with a higher probability when the neuromodulatory state is such that INaP is strongly expressed. In conditions of strong neuromodulation, and assuming that the size principle is respected during the H-reflex, Ia input larger than the one necessary to recruit S-type motoneurons would recruit more F-type motoneurons. However, as the H-reflex is often tested in the soleus muscle, composed nearly entirely of S-type motor units, such a consideration may not apply in this instance. In the same line, the impact of PICs in motoneurons during TMS depends on the shape of post-synaptic potentials induced by the descending inputs. Excitatory potentials on motoneurons evoked by TMS may be longer than those evoked by the H-reflex method but they do not exceed 10 ms. This is due to the fact that, even in response to a single TMS shock, the cortical output is more complex than a single volley. Furthermore, differences in the conduction velocities in descending axons of cortical cells might result in further desynchronization of the command to motoneurons. However, the duration of excitatory inputs on motoneurons in response to TMS stimulation is still too short to substantially engage CaPIC. INaP is likely to be the only one PIC active in motoneurons during TMS. Similarly as with the H-reflex, TMS might tend to recruit more F motoneurons in circumstances where the neuromodulation allows asignificant INaP expression. In conclusion, PICs have been inferred to exist in human motoneurons. Some caution must therefore be taken in interpreting the results from classical neurophysiological studies that, in part, depend on motoneuron excitability. It would be very useful to find methods to determine the neuromodulatory state of the subject in different motor tasks since any changes on this state can modify INaP, CaPIC and the resonance acuity of motoneurons by changing Ih.'

Here is more on how to best measure the background level of EMG activity, as described in a recent paper.

“The background level of EMG activity,was measured in the brief 20 ms interval between stimulus delivery and MEP onset. Such a near instantaneous measure is possible in recording conditions with little or no stimulus artefact. The best estimate of the level of activity at the time of an evoked response is one that is closest in time to it (i.e. the level of activity at which the response actually occurs). Estimating the level of activity 50 ms before stimulus onset leaves a time gap of uncertainty of 70–80 ms. The current method reduces this uncertainty to ~ 20 ms. The method should also be applicable to muscles with a short MEP latency, such as the biceps, as long as the recording is artefact-free and the estimation interval can be increased to improve the statistics. It should be understood that the purpose of estimating the mean background EMG in a short interval just before MEP onset was to be sure that MEP variability was not significantly due to fluctuations of the background EMG, leaving factors upstream of the motoneuron pool as the main source of MEP variability. This issue is dealt with in greater detail in the results and discussion.”.